The suburban homeowner is rarely looked upon kindly. They are normally portrayed as conservative, snooty, and narrow-minded. As a huge percentage of any population aspire to living in the suburbs, this stereotypical image seems unfair.

A Symbol of Aspiration

In the West in the last century, especially for the aspirational working classes, having a home in the suburbs was a status symbol as much as a home. Inner city ghettoes in the 20th Century either crushed people, or provoked many to try and get out of them.

The suburban homeowner in the United States is traditionally seen as someone who is happy with their lot. They are often portrayed in movies as reaching a certain level in life, and then feeling no motivation to push themselves further.

Cheesy TV commercials of the 1950s and 1960s would portray the bliss of the American Dream. The perfect family trying out the local kitchen appliance or electrical goods would nearly always be a suburban one. The family would always seem to be squeaky clean, and the viewer could be forgiven for thinking that they had never done anything wrong in their whole life.

Whether the suburban homeowner began to believe the TV commercials and consider themselves superior to city dwellers, town dwellers, or people from rural areas is open to question. The TV commercials didn't do the suburbanites any favors, as they soon became perceived as rather shallow members of society, who were obsessed with status symbols.

A Sense of Community

Despite their perceived faults, the suburban homeowner is recognized as being a good neighbour. Another positive effect of living in the suburbs is that there is a feeling of community, and a certain amount of healthy competition. If everyone in the street has an immaculate garden, then there is pressure on all the individuals in the street to keep their standards up. Thus, anyone moving into a suburban street will be instantly aware of one major way of being accepted.

How Writing Frees the Mind

Though writing can be hard work, it can be a release from the stress of everyday life. We all have problems to deal with, and we sometimes need a creative outlet to lift our spirits. Writing is a great way to break free of the intensity of 21st Century living.
How Writing Can Be an Escape
Writing frees the mind in that a writer can immerse themselves in a story, or just simply by writing about something that they love, or by writing a poem about a loved one. Writing can be at its most uplifting for the writer, when the writer just writes about their own personal feelings - an extension of writing a diary if you like. The mind then isn't cluttered by concerns about correct research or merely appealing to other people. You can just write for yourself, and it may well help you cope with some of your problems along the way.
It can be strange in seeing how some writers actually do manage to muster the motivation to write when the world around them is falling in on them. Sometimes it must seem like writing is the one thing that a writer is in control of, and maybe that is the key. The words are yours, and though you can't fully control life's events, you can control what you write.
A writer who has an otherwise dull life will see writing as an escape also. All human beings do need something to grab hold of if their lives aren't happy or joyful, whether it's music, art, writing, reading, or having a nice walk in the country. All these may not only free the mind, but can have an uplifting effect on the soul, too.
Writing Is Good for Us
Writers can begin writing in an unhappy state, but within minutes they can be lost in writing, and though the troubles of the world are still there, during the time a writer writes then at least all the sadness is in abeyance. Even when a writer writes about sad things in their own lives, then that can be a cathartic experience for the writer. Writing, by itself, won't solve life's problems, but it can help the mind take a time-out from those problems, and consequently make them a little easier to deal with.
Nobody should really write with money being their main objective. Writing is a powerful force, and it can have an amazing impact on our wellbeing. There can't be a much better reason to write than that.
From the Paul Rance book, Made of the Write Stuff.

Kindle version of Made of the Write Stuff

Email ThisBlogThis!Share to TwitterShare to FacebookShare to Pinterest
Labels: Writing frees the mind

Peace & Freedom Summer, 2019 is now available via Amazon. Featuring a tribute to Steve Sneyd by Pete Cardinal Cox, articles from the likes of Elizabeth Beebe and Donna Salisbury, poetry from Francesca Heaney, Sylvia Evelyn, Gwynn Watt and Lady Samantha - among others. Reviews of the No Fracking album by Ralf Bevis and Federico Balducci, and the book, Herbs of the Sun, Moon and Planets by Steve Andrews. 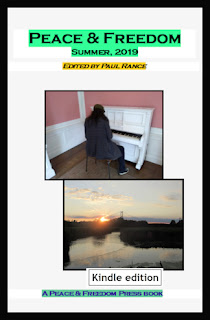